Rivers Edge last night, Colin behind the bar, beard on the face, Galaga/Ms Pacman in the corner. Good stuff. I now have my top 3 arcade games that I will purchase once I have some scratch: 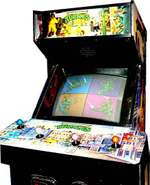 1. Ninja Turtles - Me, Ian & the old man beat this game at the KoP mall about 15 years ago, and it was glorious. It was probably the greatest memory of my Dad acting like a child, or most appropriate I guess. I don't remember if we had to be somewhere. I don't remember if we had anything else to do that day. Because we didn't leave that spot until the game was beaten. Random kids would come in and play a few levels, filling in the other 2 positions, but Ian and I held strong, and Father kept getting quarters until we fucked up Shredder and Krang at the end. We beat the game. I remember nothing else from that day, probably a psychological block, but I remember going to town on the Ninja Turles game. I want this game. #1.

2. The Simpsons game. Pretty much the Turtles with different graphics. But come on, its the Simpsons and it's awesome. The last time I saw this game was in Belmar, NJ back before I was dating a Jersey girl, Mike was dating a Jersey girl, and Simon was still around. Seeing Simon next week would be pretty top notch. But it was raining in Belmar (God, I wish I would have known that area of NJ would be my hell someday) so we ducked into an arcade, and sure enough they had the Simpsons game. Simon and I beat that shit that day. Another good day. Kel was dating Dan, but it was still a good day.
To quote Craig: If I had the Turtles and the Simpsons video games, I would be so happy right now. 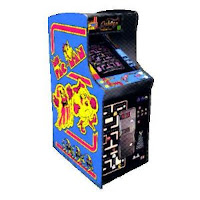 3. Right, Galaga/Ms Pacman. Sure, it seems like such a staple of arcade games, and maybe it was the copious amounts of alcohol in our systems (definitely, maybe) but playing Galaga was fucking AMAZING last night. And then Michelle & Deric rocked some Ms Pacman and THAT was amazing. I want this machine in my home so it can be amazing everynight. It's the reverse food chain of video games. I like these more than Genesis. I like Genesis more than PS2. #4 on the list would be Bad Dudes, but I don't have the energy to write a paragraph on that.
Posted by Brett... at 12:29 PM No comments: