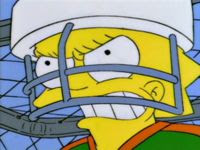 This classic might not be higher on the list simply because of the fact that this is Deric's favorite episode of all time...and we know how I need to be original...even to the point of the Simpsons. Yes, I'm an idiot. But let's not dwell on that...let's dwell on this great episode...and my new love of ellipses...

"Now, here's your Action anchor: Kent Brockman."
"HELLO, I'M KENT BROCKMAN!!! Our top story tonight: a tremendous EXPLOSION...inthepriceoflumber. President Reagan dyes..........his hair. Plus, Garry Trudeau and his new musical comedy revue. But first! Let's check the death count from the killer storm bearing down on us like a shotgun full of snow."
"Well, Kent, as of now the death count is zero. But it IS ready to shoot right up."
"Oh my God. Damn you snow!"

Like my #5 pick, this is a true Simpson's one-off story that never comes back to merrily haunt us in the future (unlike Lisa the Vegetarian). The Simpsons kids playing hockey? Absolute randomness that pays off in comedy spades.

This episode has so many instant classic moments that I remember busting my proverbial gut to when I first saw it all those years ago. This came out in 1994...and is still funny today. And THAT is the definition of classic, my friends.

I'm sure another universal aspect of this ep has to do with Homer (once again, after Dead Putting Society in season 2) being the overbearing, horrible sports father (I'm sure there's a better phrase for that). While South Park may have taken the cake with this stereotypical, albeit quite true to life, portrayal of an overbearing father...

...but I think the scene of the Simpson family riding in the car on the way to Bart's hockey game is a groundbreaking one in the overall development of the humor and bite of the Simpsons writing. Homer tells Bart to remember to just have fun out there today..."but if you lose, I'll KILL YOU." And everybody laughs. But before the scene ends, Homer reminds Bart that he really isn't kidding...and Bart knows it. Terrifying stuff that happens everyday with real fathers & sons, but mined for comedy here...and absolutely golden.

I can't imagine just how much fun it is to write for Homer. The gag with the pie is among one of his best. He's got so many great lines in this episode, it's ridiculous. And it's not just all stupid moments...he treads the line between idiocy and just flat-out horrible parent...and it's just great. An amazing bit of writing when you can make a character so despicable and endearing at the same time.

And this gag is one of my all-time favorites...but I don't have to tell you that...because, well, it's on the list, isn't it?

"All right, I'm going to make a little deal with you mugs. I'm going to let you all out to see my team play the hockey game IF you promise to return to your cells."
"Sorry, pig, we can't make that promise."
"All right...all right, I'll sweeten the deal. You can see the game, you don't have to come back,, BUT you have to promise not to commit any more crimes, OK?"
"No."
"I'll take that as a yes."

So, not to repeat myself...but I will anyway...just a classic episode all around. Pretty much every joke is a winner, it has a happy ending...everything a classic Simpsons episode has. Well done, #4, well done.

Now, "The PTA Disbands!" used to be my favorite episode, simply for the fact that it has two of my favorite jokes in Simpsons history. Upon reviewing the episode, overall it just didn't do it for me to make the top 5, but these two gags are simply amazing:

A great whisper-down-the-lane joke, but the key to it lies in the words they choose to put at the end. For some reason the combination of purple, monkey, and dishwasher, and Hank Azaria's impeccable delivery, just hit all the right notes. I don't know...I feel this joke might be a bit underappreciated, especially when they beat it into the ground with Edna K.'s next line "especially with that purple monkey dishwasher comment." But as we all know, I love the stuff that slips through the cracks the most.

"The PTA is disbanding?! Ahhh!!!"
[guy jumps out window]
"No! The PTA is NOT disbanding!"
[guy leaps back into room through broken window, dusts himself off, and sits down happily, like nothing happened]

Well, a little late in getting this out, but here we go. I promised you one a day, and since that ain't happening, we'll do 2 today and 2 tomorrow...with the big finale on Friday.

So making this list has had me doing a great deal of Simpsons introspection. Some of the results surprised me. Some didn't, in a good way. But every episode & moment on this top 5 list is an absolute classic, so let's get this party started.

To both minimize & maximize anticipation of the final 5, here are my favorite episodes that DIDN'T make the list (in no particular order):

Homer vs. the City of New York
Mountain of Madness
Itchy & Scratchy Land
Lemon of Troy
Marge on the Lam
Flaming Moe's
Homer at the Bat
Lisa the Vegetarian
Krusty Gets Kancelled
&
Last Exit to Springfield

Last Exit to Springfield just might be the greatest Simpsons episode ever put together, and leaving that and Homer v. the City of New York off my final 5 was truly heartbreaking. This was a hard list to put together, almost impossible, but I did. So...coming in at #5:

"Can't a guy walk down the street in this country without being offered a job?!"

I contemplated reviewing each episode on the list with just quotes from each, but alas, not. I'll just pepper each review with my favorites.

Perhaps Albert Brooks's greatest of all his guest performances is that of Hank Scorpio. Homer takes a job with Globex Corporation and the rest is history.

This episode was written by the great John Schwartzwelder, who has probably written all the greatest, if not funniest, Simpsons episodes ever. The Simpsons has had plenty of amazing runs, but this episode contains one, if not the best, between Scorpio & Homer:

"Uh, hi, Homer. What can I do for you?"
"Sir, I need to know where I can get some business hammocks."
"Hammocks? My goodness, what an idea. Why didn't I think of that? Hammocks! Homer, there's four places. There's the Hammock Hut...that's on third."
"Uh-huh."
"There's Hammocks-R-Us, that's on third too. You got Put-Your-Butt-There?"
"Mm-Hmm."
"That's on third. Swing Low, Sweet Chariot... Matter of fact, they're all in the same complex; it's the hammock complex on third.
"Oh, the hammock district."
"That's right."

Now, I know when you break a joke down, it becomes less funny...but the fact that Homer, needing "business hammocks," knows the whole time that there's a "hammock district" in town...a town he's lived in for less than a week...and that he still feels the need to ask Scorpio about it...is just pure genius. I will never stop laughing at this scene.

There's another great scene that gets cut in the syndicated version of the episode that is just fantastic. It doesn't really translate when I write it out, but here you go anyway: Bart's been placed in the remedial class and he's depressed after realizing what's he's gotten himself into. In the syndicated version, the scene ends with him sitting at his desk all sad. The cut scene involves one of the kids coming up behind him and comforting him...slowly patting him on the back. But the pats quickly become harder and more rapid, until the kid just slaps Bart as hard as he can on the back and gets yelled at by the teacher. An amazing bit that had slipped through the cracks until I got the DVD.

On the commentary track, they talk about how Albert Brooks does a lot of improvising. Who knows which lines were scripted and which were improvised, but there are just too many to pick a favorite...hmmm...like this list in a way.

"Uh....you have any sugar around here?"
"Sugar? Sure."
[Scorpio fumbles in his pockets, takes out a few handfuls of sugar]
"Here you go...sorry it's not in packages."

The b-story of Bart, Lisa & Marge not having the great time Homer is in this new town may not be the most compelling, but Homer's side of it make up for them in spades. Project Arcturus...the Denver Broncos...Homer getting "Mr. Bont" killed...the weather machine & germ warfare divisions...all amazing. So kudos to "You Only Move Twice"....coming in strong at #5.

So after each of the top 5, I'll also be posting some of my favorite moments from episodes that didn't make the top of the heap. Here's batch number 5, from Itchy & Scratchy Land:

"We're now approaching our final destination, Itchy and Scratchy Land: the amusement park of the future where nothing can possiblye go wrong."
[Everyone looks worried.]
"Er...possiBLY go wrong. Heh...that's the first thing that's ever gone wrong."

"There's no need to murmur, ma'am. Here at Itchy and Scratchy Land, we're just as concerned about violence as you are. That's why we're always careful to show the consequences of deadly mayhem so that we may educate as well as horrify."
"When do you show the consequences? On TV that mouse pulled out that cat's lungs and played them like a bagpipe, but in the next scene the cat was breathing comfortably."
"Just like in real life."
[pause]
"Hey, look over there!"
[family does so, he takes off quickly]
"Nyaaang!"

[as the bird sancutary is in chaos, Hans Moleman in the telephone booth making a call]
"I'll take the largest seed bell you have."
[pause]
"No, that's too big."

"Dad, the flash must have scrambled their circuits."
"What are you, the narrator?"

Man, I just gotta say that Itchy & Scratchy Land definitely comes in at a close 6th. Geez, what a classic.

Stay tune for pick #4...coming your way in a few hours. Oh, you know the anticipation is killing you...because I just assume all of you read my blog in real time. M'yes...
Posted by Brett... at 5:30 PM No comments: