Bernie created with love by Ashley.
Posted by Brett... at 10:02 AM No comments:

No, I get it. You're in your mid-20's. You've fallen into what you can only relate to as a personal wasteland. You've moved away from home. You don't have a fulfilling job, or maybe even any job period. You've never had really good sex. You're white. When you break it down to its basics, take a step back for a hot minute....you've never really had any REAL problems.

Why haven't you had any real problems? Because you haven't tried. You've sat back and "observed." But let's be honest, you weren't even fucking paying attention, were you?

Garden State is the result of Zach Braff not really paying attention. You've got a roof over your head. You've got food on your table. There aren't any wars going on outside your window. Stop being a dickhead and man up for a fucking second. Shit.

If you're going to make a movie about a bunch of random bullshit and string it together to try and make it pretty, then make fucking Amelie. At least Jean-Pierre Jeunet established from that get-go that you, sir, have no chance in the slightest with Audrey Tautou. Yes, Amelie is a bunch of bullshit, too. But its a fairytale. Braff tries to make Garden State real. Dumb shit.

Braff's "Large" is an upper-middle class white man. Mom was in a wheelchair. Dad was a dickhead. Dad puts him on all kinds of drugs. Large takes them consistently for 10 years. Boarding school. Moves to LA. Mom drowns. In the tub. Suicide. Large comes home. Parties with some friends. Decides maybe he doesn't want to take the drugs anymore. Is tired of being "numb." Meets Natalie Portman at the doc's office. Over the course of about 11 or 12 inane set pieces, they fall in love. Almost a bullshit cop out sad ending, then a bullshit cop out happy ending. Yay.

FUCK this movie, man. I could probably write about 20 pages on all the bullshit that goes down throughout, but I'll limit it to the two things that bug me the most. No wait, three.

1. Andrew Largeman is an ACTOR. Are you kidding me? So, after the movie ends....he's in love with Natalie Portman. He's off the drugs. Mom's in the ground. His friends are bums, but one of them is a millionaire, so there's no real conflict there. So, eventually he's going back to LA, right? To be an actor? Because its been established that he's got no real life skills. What the fuck is he going to do? Hey Zach, are you saying that being an actor, pretending for a living, isn't important enough to continue to pursue? Because you're an actor, bro. I'll tell you what...after banging Natalie Portman for a few days, Andrew Largeman is getting back on that fucking plane and going back to LA. "Large" is the star of his own movie, like we all are...there's no fucking way this kid isn't a born actor. What, he's going to go back to school with Titembe, become a lawyer? CSI? Fuck off.

2. The working title of this movie was "Large's Ark." Really? How does that not register to you as the worst fucking title of all time? Oh right...because your masterful centerpiece of the movie...some fucking ark in the middle of a nonexistent canyon in north jersey. Who lives in this ark. Some dickhead and his wife and their asshole baby. This dickhead buys jewelry that has been delivered to him by graverobbers. But he gives it back to Large, so we're cool. And this dickhead just loves life, man. He loves living in the bottom of this hole in a boat with his family. Yeah yeah, I get it. You can be happy anywhere. Cool. But its the exchange between Large and this dickhead at the end of the scene:

"Hey dickhead [Albert], good luck exploring the infinite abyss."
"Thank you. And hey, you too."

What the fuck?! Boo-hoo middle-20's white boy, so now I'm going to try to have fun exploring my "infinite abyss." Fuck you. Oh my god, fuck you Zach Braff. How do we escape this infinite abyss...besides, of course, getting a fucking clue and getting off your ass? 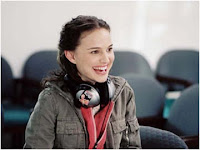 3. Oh right, meet and bang and fall in love with Natalie Portman. The original "manic pixie dreamgirl." OH! So THAT'S how I escape my infinite abyss. My fucking horrible pointless life. Because she's got epilepsy and wears a helmet when she works and is obviously single. Here's a test: go out and find yourself a Natalie Portman manic pixie dreamgirl while you're in your mid-20's. Oh my god, she's amazing, she makes me think, she's charming and adorable and great in the sack. Perfect. Well, guess what...you've decided to hang back in Jersey for a while instead of going back to LA to act. Okay, so once all this bullshit, vacation-style amusement ends, real life starts back up. I'm going to tell you something...when everything settles down you're going to realize something: this bitch is crazy. Why is she single? Fate? Coincidence? A convenient plot point I? Yes, all of those things. Large is an actor, she's really eccentric, they're a match made in heaven. Gimme a fucking break. He's a dumb fuck, she's nuts...I give it a few months before they realize that they're both a couple of fucking losers and he goes back to LA. The end.

I'm amazed when I hear that so many people can relate to this movie. What about this movie is realistic? Your real life is in your hometown because of memories? I'll be fucked if I'm ever moving back to Phoenixville. There's a Natalie Portman out there somewhere for you? No, there isn't. Love is something you're going to have to seek out. Work for. Its not going to hump your leg in some fucking waiting room. People change. You've gotta adapt. Natalie Portman's character lives at home like a damn child. Zach Braff is an actor who just stopped taking the dope. But they find love. Huzzah! Problem solved!

PLEASE, Zach Braff, please make a sequel to Garden State. You can still call it Large's Ark. Or how about Largeman Almighty? Take that Season 7 Scrubs money and make shit happen, son.

I can't wait to find my manic pixie dreamgirl so I can have a sleep over with her and then never call her again. Because that bitch crazy.