Last week, I "relearned" a "valuable" lesson. I took it upon myself to say nice things about my latest project & also the people I work with & for. Nationally. Then I got yelled at. And then Diablo Cody, out of all the ex-stripper Oscar-winning screenwriters in the world, tweeted this:

"I think anyone who tries anything, ever, deserves to be buffeted with insults and abuse. They "put themselves out there," right? High five!"

I like it. The sarcasm is so thick I could slice off a piece, dip it in batter, and toast it, french-style. Which I did. And it was delicious. Also...organic maple syrup is way too expensive.

So I'm going to stop trying. At certain things. And focus on other things. Other things which I can only hope to get in trouble for at some point in the near future. Because like people who sometimes strip & write movies, I can make up quotes, too:

"Nobody ever succeeded by sitting on their hands & doing exactly what they were told."

Okay, not the most eloquent quote. Let me try this again:

"Sharks can't swim backward. If they do, they die."

"Be average with a C average."

No, wait. That last one doesn't work at all. I guess my whole personal mission statement can be summed up by my latest & greatest catchphrase:

You sort of say the "on" like "own." So it's something like "G-G-G-Get owwwwn it." It means to go with your gut. It means to trust yourself. And it means to try. Don't be like Jeremy Bonderman or Ian Snell (especially Ian Snell). Snip off the bullshit & try a little harder. Because not everybody does. Most people don't. And that's a good thing. Except when you get in trouble for trying because other people didn't try. But in the end, you DID try. You see what I'm trying to say?

And enjoy some toast from France every so often. Its such a nice treat after such a trying week. 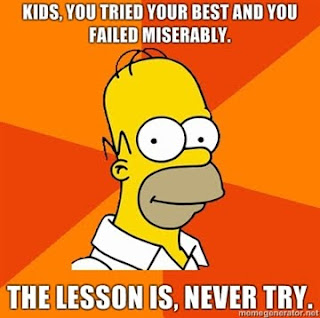 Promo I did for upcoming Mets season. Used a whole mess of hi-res stills & pixel motion frame blending in After Effects. Additional animation by Luis Medrano. Music by Peer Gynt...or someone who remixed Peer Gynt. I like saying Peer Gynt.

Let me start off by saying I'm not a sports writer. Gross. Unlike those guys, I played competitive sports growing up and even went to college on an athletic scholarship. Okay, it was for track & field, but still. I also want to clarify that I haven't exactly followed your career under a microscope. I work for a team based in the National League, so the closest I've come to critiquing your game is through MLB the Show on PS3. All that being said...I think you're making a mistake by sitting out the 2011 season.

For some reason, the speculative tweet I read this morning about your current dilemma struck a chord. Following the speculation (which unfortunately about 80% of sports writing is (zing!)), it was written that either the free-agent offers you received this winter were not at the level you deemed acceptable OR that you don't have the energy for more rehabs and do not want to fight during spring training for a shot in a major league rotation. I don't want to believe, nor to I find acceptable, either of those reasons for taking a year off from your job. Tell me its for personal reasons, health reasons, that you don't have a love for the game anymore, or retire. There are many things that an individual can offer the world, and without a doubt your life extends well beyond pitching and baseball. But sitting out because you didn't find the offers to your liking? Sitting out because you don't want to be your best and compete to prove yourself? Unacceptable.

Now, before I continue to run my mouth like some smug jackass (too late?), I should let you know just a slice about me. I'm a mild-mannered video editor for a regional metropolitan sports network. So yes, I sit on my ass all day in front of a computer. I'm 29 and have been doing this for about 6 years. Its what I've always wanted to do. Getting to watch baseball, edit promos, short music videos, and be told that I'm pretty good at it...well, that's just fantastic. And like all people who get what they want, or are in the process of getting further with what they're good at, it was a lot of damn hard work. I took 2 years off after I graduated from college, so I started 2 years behind, and was reminded of it everyday. I lied my way into my first editing job and had to teach myself how to edit over that weekend. Long hours. Terrible content. Heartbreak (that's for another letter). Weight gain (sitting+tv+beer...we don't need a mathematician to crack that code). Six years later and I'm exactly where I want to be and can't wait to get to the next level and see what happens then. Huzzah. (One paragraph doesn't even begin to scratch the surface, but I'll save that for my unauthorized autobiography in 30 years).

I can't even imagine what it's like to be a baseball player. My brother was an All-American shortstop in college and I've never been more envious watching somebody else succeed. I threw a baseball against a radar gun once. 68mph. Straight fastball. Naturally, you have a gift. You're a professional athlete. And shoulder problems are no joke. 2010 was a year to forget, if you want to look at it that way. For me, every year is a year to forget, in the sense that the next year is going to be the year to crush it even more. I look back at my accomplishments from 2010 and kind of shudder. 2011 is the year for me right now. Right now I want to make 2010 look like a pile of puke. On top of 2009's pile. And such and such.

You were drafted after junior year of high school. You were the youngest opening day starter since Dwight Gooden. You made $12.5M last year. You're 28 freakin' years old. If the marathon has you bested, if the shoulder won't let you pitch anymore, then yes, hang 'em up. It sucks, and I can't even begin to image walking away from the game you love. But if it's because you weren't satisfied with the offers you were receiving? Because you can't find it in your heart to compete anymore? Well sir, that's a recipe for playing for the Cleveland Indians (it's 2011...I have nothing against the Indians. If this was last year, I'd say Diamondbacks. No hard feelings).

So Mr. Bonderman, and I call you Mr. even though I am technically your elder, I implore you to give 2011 a shot. Not for me. For baseball. The only way so many of us can get close to this game only results in being tackled or tased by portly security guards during the late innings of a reverse world series. Play the game because you can. Take a minor league deal with incentives (incentives which pee on my yearly salary). Compete. Crush it. Prove somebody wrong. Prove more people right. Do it because you can. Do it because you want to.
Now, I'm going to go play a round of MLB the Show to unwind. And I think I know who I'm going to pitch with tonight.